WISDOM'S PATH OF PEACE : a monument to interfaith hope

Why, in my blog subtitle, have I said I am seeking 'Wisdom's path of peace'?

There's a lot about Wisdom in the books of the Apocrypha, which is I suspect one of the big reasons they have been marginalised over the years. Wisdom is, at her most developed, a feminine personification of God, and a rare source of spiritual literature for those hungry to hear 'She' as well as 'He,' in relation to God. In the quote above, Wisdom's fountain is synonymous with God's path.
Wisdom is equated with Christ - pre-existent Christ that Paul talks about in Colossians 1:15-20,
'He is the image of the invisible God, the firstborn of all creation; for in him all things in heaven and earth were created ...'
compared with Proverbs 8:22-9:6,
Wisdom says 'The Lord created me at the beginning ... ages ago I was set up, at the first, before the beginning of the earth ... happy are those who keep my ways ...for whoever finds me finds life ...'
or the Apocryphal Wisdom of Solomon 7 -
'For Wisdom is more mobile than any motion; because of her pureness she pervades and penetrates all things, for she is a breath of the power of God ...' 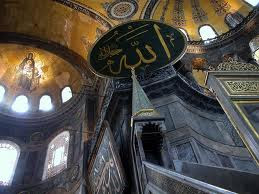 Holy Wisdom - Greek Hagia Sophia - was much venerated and the texts which describe her (Wisdom of Solomon in particular) were held in high regard by early Christians and it seems by Jesus himself. Churches were named after her - notably the famous Hagia Sophia of Istanbul, once converted into a mosque and now a museum where Christian icons and Islamic calligraphy proclaiming the name of God, sit side by side.
Although the place is closed for worship now, as a museum, whatever the conflicts that took place in the past, all there is to see now are the prayers and praises of the ages, suspended from the walls, together.
Just suppose that building outlived our current 'civilisation.' People in the future might find it and conclude that people of different faiths were able to worship God together, in mutual respect. It's not impossible, after all - I've seen it done.

Older Post Home
Subscribe to: Post Comments (Atom)
Thus says God:
'Stand at the crossroads and look,
and ask for the ancient paths,
where the good way lies; and walk in it,
and find rest for your souls.'
Jeremiah 6:16