It's interesting how the Christian calendar interweaves with the European pre-Christian calendar which is often now known as the 'Celtic' year. Some people say the Christians just 'took over' old holy days and holy people to stamp their own identity on the old and that was that, but I'm not convinced it was always so straightforward. Sure, some Christians through the ages have done a lot to wipe out indigenous spiritualities, a fact of which I am ashamed, but others prefer to respect and even to preserve traditions, in their own way. Take the Celtic saints - some chopped down sacred oaks, others like Brigid, whose holy day was yesterday, built their monasteries deliberately close to oaks but refused to harm the trees.There has been an ongoing and insurpressible popular interest in the old ways and a need to keep loved traditions. How else do we get Easter eggs, Christmas trees, May Queens and All Hallows Eve (Haloween) falling when it does?
Today the Church celebrates Candlemas, the day Christ is brought to the Temple in keeping with Jewish law at the time to dedicate each first born to God. He had to be brought forty days after his birth, hence the fixed date of February 2nd. It strikes me as such a massive coincidence that I doubt that it is a coincidence at all, that this celebration of the newborn 'lamb of God' coming to the temple falls on an older 'Celtic' holy day, Imbolc, when the birthing of the lambs and flowing of ewes milk was celebrated. 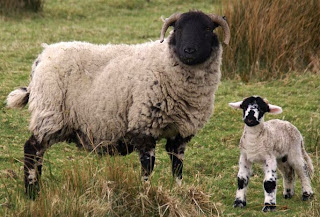 If I were going to decide on a day to celebrate the dedication of the holy child Jesus this is the best day I can think of in the whole earthy year. It almost compells me to meditate on the rich symbolism of the lamb who died, ('a sword will pierce your own soul too,' says Simeon to Mary), the lamb who stands before the throne in the temple, the lamb who is both willing sacrifice and victor over death ... I can even meditate on the flowing milk and the many Christian thinkers who described Jesus as our mother, whose blood is our milk.
﻿
﻿

This depth of symbolism I believe did not escape earlier Christians as they sought to bring the Gospel story into the lives of the people in a way that would be meaningful. There is a sensitivity here, to my mind, not a heavy-handed appropriation, as though the Christian liturgists could not imagine a time when people would not celebrate the lambing, and the lambing would naturally draw their minds to the stories of the lamb of God, the sacrifices and gifts of maternity and the free-flowing milk of God's nourishing grace.
Posted by Annie at 02:13

Newer Post Older Post Home
Subscribe to: Post Comments (Atom)
Thus says God:
'Stand at the crossroads and look,
and ask for the ancient paths,
where the good way lies; and walk in it,
and find rest for your souls.'
Jeremiah 6:16