BRITISH NATIONAL IDENTITY? - the Green Man and the Three Hares

There's a lot of talk these days about 'British Identity.' It seems quite difficult to define; do we look to our industrial heritage, our colonial arrogance, our romanticised pastoralism, the residue of that famous 'wartime spirit,' a propensity for sarcasm?  Or how about our 'island identity'? Read this interesting article by the BBC http://www.bbc.co.uk/news/magazine-12244964 that describes 'The moment Britain became an Island,' caused by a huge tsunami, around 8000 years ago ... (more on being an island, below.)

Or another idea, could chould we look to our parish churches? Some of our politicians are hoping to look to them for crucial practical community support in these hard times, as part of this 'Big Society' scheme - (see http://commonwealthnetwork2010.blogspot.com/2011/01/big-society-on-small-gloucester-estate.html for the implications of this plan)

Well, the old churches and cathedrals that punctuate our landscapes, certainly used to provide much of the focus for daily life for a good thousand years or more, for good or ill, so perhaps they are not a bad place to start. And what could be more evocative of good old traditional 'Englishness' than medieval roof bosses?
(Roof bosses are carved nodes, at the meeting point of timbers and stone pillars, decorated with all kinds of fascinating designs, it seems opportunities for craftspeople to show off their imagination and dexterity.)
Two of the most evocative roof-boss designs of all, which sometimes appear side by side and which seem to be steeped in British folklore and the forests that used to cover the land, are the Green Man (also beloved of pub signs of course) and a circle of three hares or rabbits, joined by the ears. 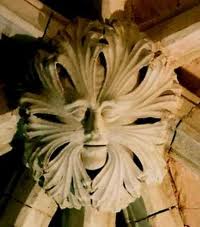 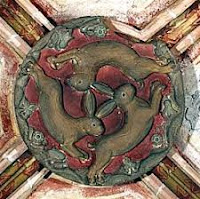 Although the inspiration for both the Green Man and the Three Hares seems to come directly from out of our green and pleasant land, in fact, both motifs made very long journeys to get to Britain, long ago.

The earliest evidence of a Three Hares motif is in a Buddhist temple in China, dating back to the 6th Century CE. The motif gradually finds its way along the ancient silk-trade routes from China - ancient highways and sea-ways that linked up the known world.
The Three Hares appeared in numerous locations along the route through Asia and Europe, decorating both Islamic artefacts and Jewish synagogues, as well as European churches.
Travelling craftspeople, perhaps caught up in the monstrous machine of the crusades, seem to have seen the design and liked it, and brought it back with them. Whether they also brought with them any sense of the motif's symbolism we do not know; we are free to reach our own conclusions about what the hares represent, but there they are, on the rooves of our churches, as their sisters continue to decorate the holy places of others cultures and faiths.

Visit the excellent site about the Three Hares, for fascinating photos and further information: http://www.chrischapmanphotography.co.uk/hares/index.html


The journey of the Green Man seems very similar. Read about Mike Harding's discovery of the motif as far away as Jain temples in India, which greatly pre-date our own - http://www.mikeharding.co.uk/greenman/the-green-man-in-india . We might have named the Green Man as one of our nature sprites or folk characters, Jack o' the Green, or other local variants, but he has older brothers by different names across the world.
As Mike Harding says, it's not at all surprising to find communication of symbols and myths, designs and know-how as well as languages, across Asia and Africa and into Europe, naturally following trade routes.

The Green Man and the Three Hares say something to me about 'British national identity.' We are and always have been part of a wider world that has inspired 'us' and enriched 'us' culturally, throughout history; in fact 'us' makes no sense unless we consider that the population itself is an amazing gathering of peoples from all places too, stretching back to the time of the last ice age. Even the very first people here didn't spontaneously generate from our beloved rocks and soil, they walked here  from the continent along with lots of animals, over a land-bridge that now lies under the sea.

﻿﻿
﻿﻿  And before that, how did people get to Europe? They didn't spontaneously generate there either, they walked, over thousands of years, from Asia and Africa, the ancestral homelands of all humanity.

It seems to me that there is such a long history of fluidity and cross-cultural communication concerning the make-up of Britain, as the Three Hares and the Green Man illustrate, that it is almost impossible to pin down one definition of identity - unless it is 'fluidity' and 'cross-cultural communication' itself.
Our ancestors seem to have given us a beautiful icon for our times, by bringing the gifts of the wider world firmly into their holy places, and welcoming them as their own.

Newer Post Older Post Home
Subscribe to: Post Comments (Atom)
Thus says God:
'Stand at the crossroads and look,
and ask for the ancient paths,
where the good way lies; and walk in it,
and find rest for your souls.'
Jeremiah 6:16